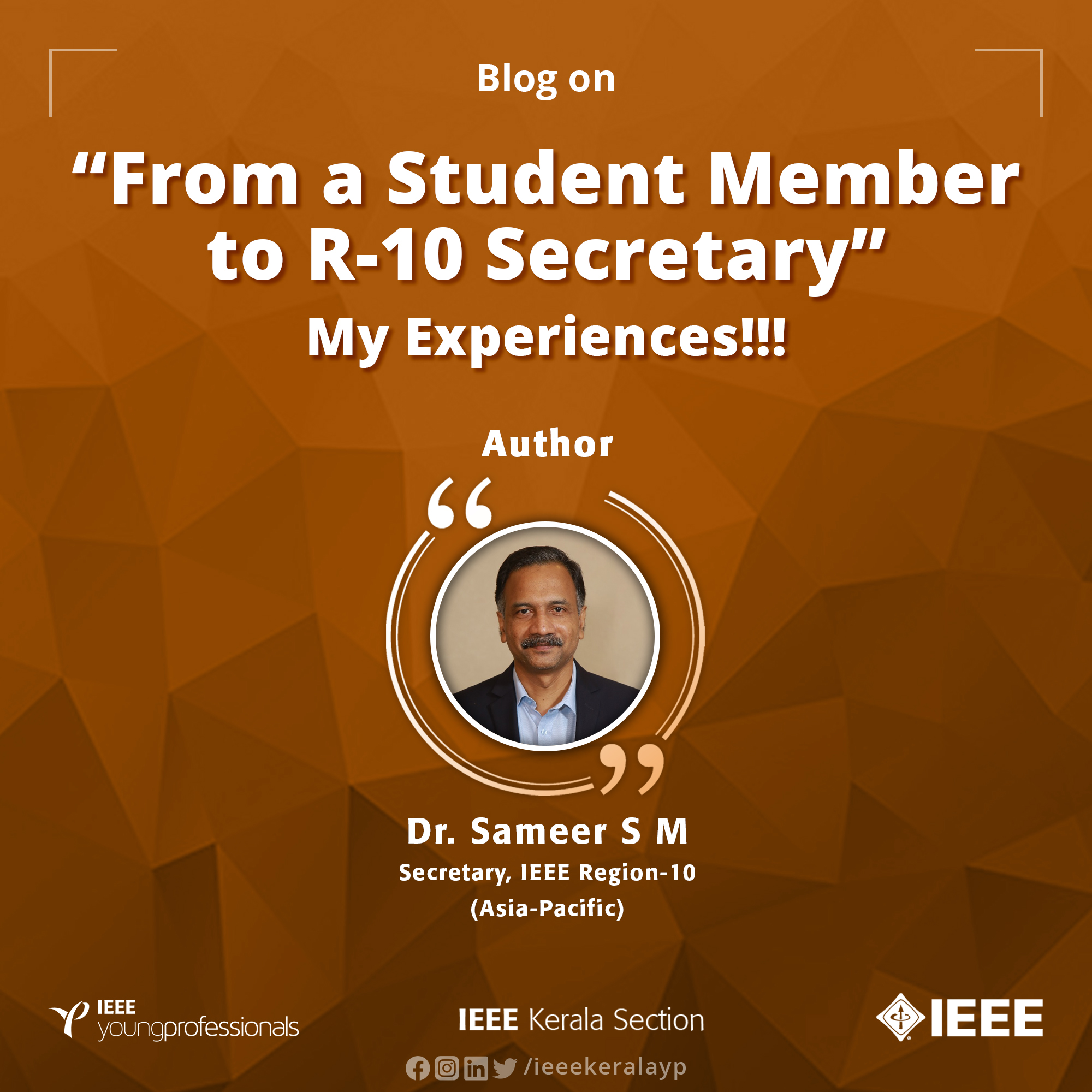 While I was a member of IEEE during my B.Tech days for just one year or so, I never bothered to take IEEE membership after joining my profession. In fact I was not hearing much about IEEE those days except for some occasional conference posters on the internet. That was during the period 1995 to 2005.

When I joined IIT Kharagpur for Ph.D in the year 2005, I have noticed an office near E&ECE department of IITKGP with the name board IEEE  Kharagpur Section. One day I went inside and U could see some IEEE magazines and Journals there. I knew that I need to publish papers as part of my Ph.D and if I become a member of IEEE, I can participate in IEEE conferences at subsidised rates. But there was more interesting in store there in that office. At that time, laser printer was a kind of luxury. In our lab only a dot matrix printer was available. The caretaker in IEEE told me that if I take IEEE membership I can take printout of 200 pages per year free of cost using the printer in the office. That was interesting.. Printouts, conferences…I decided to take IEEE membership again!

I took the graduate student membership on the very next day, and availed the facilities in IEEE office. And that was continued till 2008, the completion of my Ph.D. Apart from conferences perhaps the only IEEE program that I have attended those days were the Annual General Meeting there and you may not wonder that the only interest I had in those meetings was the sumptuous dinner. Later only when I became active, I realized that IIT Kharagpur is the headquarters of one of the smallest Section of IEEE in India!

Even after joining back at NIT Calicut after Ph.D I continued my IEEE membership, but this time as a professional member. But, forget about Calicut, I haven’t noticed any IEEE program happening in the Malabar region. The only interest was again confined to IEEE conferences happening outside Kerala or India. It was at that time  Prof.Mohandas Sir met me one day, and talked about his more than 25 years of journey in IEEE and the lack of IEEE activities in the Malabar region, especially for professionals despite the existence of several engineering institutions in the region. Of Course many student branches were existing and student activities were happening in the area. He was continuously exploring what can be done to change the situation and finally identified a solution; ie, to file a petition to form the first subsection under IEEE Kerala Section by including districts from Palakkad to Kasaragod in the north of Kerala. We started collecting signatures of IEEE members. Approval from Kerala Section was the first hurdle for the petition. Fortunately the then Chair of IEEE Kerala Section, Mr.Sasi P.M, who hails from Calicut gave a green signal of support, and we could successfully submit the petition in early 2010. IEEE MGA approved the petition in October 2010 with Mohandas Sir as founding Chair and myself as the founding Secretary. Though the formal inauguration of Malabar Subsection was held along with the first AGM of the subsection Friday 31st December  2010 at Chanakya Hall, National Institute of Technology Calicut, perhaps for the first time, professional activities of IEEE started taking place in the region under Malabar Subsection from October 2010 onwards. The initial few volunteers met on the inaugural day identified a few activities for 2011, and the rest is history!

Personally my journey in IEEE was eventful. I have received many volunteering opportunities at various levels of IEEE; thanks to Malabar subsection! IEEE Kerala Section became a registered society during my tenure as Treasurer. We could organise quite a few events to improve the financial independence of the Section. Efforts for getting the GIEEE agreement signed and initiation of fund transfers through IEEE Bangalore office, financial reporting through the newly introduced NetSuite etc have introduced many challenges but we managed those issues well. It was at that time, the then Chair of Kerala Section, Srinivasan suggested to start a second flagship conference series for the section and entrusted me to organise the first edition. That resulted in the first edition of the biennial conference SPICES, and the first edition was held at NIT Calicut in February 2015. It was a successful event in terms of participation and revenue.

It was in 2015, I became the Vice Chair of Kerala Section and continued for three years. While the role of Vice Chair is minimal in IEEE organization structure, I was fortunate to be involved in many new initiatives of the Section; thanks to two of my Chairs, Mr.Unni Sankar and Dr.Suresh Nair. During 2017, we could organize TENSYMP2017 at Kochi; that was the first time Kerala Section hosting a flagship conference of IEEE R10.  With those learning experiences, I became Chair of Kerala section in 2018 and continued till end of 2019.

My IEEE journey narration will be incomplete without mentioning three very critical tasks projects/programs that the section has undertaken, the humanitarian activities done to deal with the massive floods in August 2018- the initiation of the rescue and rehabilitation portal keralarescue.in by a bunch of our student volunteers, and its adoption as the primary portal for this purpose by the Govt. of Kerala, and various other related activities including supply of large number of temporary electrification boards for restoring power in flood affected houses, power banks, emergency lights, medicines, groceries and so on. It was a rare occasion where all the volunteers of Kerala Section from SBs to Life Members actively contributed with passion and vigor on almost a round-the-clock basis. The immediate challenge after that was the conduct of the International WIE summit at Kochi in September. Amidst several uncertainties associated with the massive floods, we could organize the program with good international presence in September 2018 itself as planned. But the major challenge that the Section took-up during this time was the conduct of the biggest flagship conference of R10, TENCON2019 at Kochi from 17-20 October 2019. With extreme difficulties for getting sponsorship from a State that was affected with a devastating flood in 2018, and a slightly reduced version in 2019, and with concerns on pandemic like Nipah in Kerala, it was an extremely challenging experience; again thanks to a handful of amazing volunteers under the amazing leadership of Dr. Suresh Nair, we could organize TENCON at the best possible venue in Kerala (and perhaps South India) Grand Hyatt Bolgatty in flying colours in terms of participation, quality of events and revenue.

In between I received some volunteering opportunities as Vice Chair for Educational Activities and Treasurer of IEEE India Council. Right now I serve as the Secretary of IEEE Region-10 (Asia-Pacific). I tried to narrate my IEEE journey just to show how a person can contribute and grow professionally from being a passive IEEE member to an IEEE volunteer. Believe me, if you are a person who loves to meet new people, participate/organize new programs of varying interests, IEEE is the best professional organization that you can try. My asset in this journey is the wonderful array of people that I could closely interact with and the cheerful moments that we have shared and the challenges that we have faced together. Better late than never..! Welcome to the volunteering world of IEEE, and experience your IEEE.

Dr. Sameer S M is a Professor in Department of Electronics and Communication Engineering, National Institute of Technology, Calicut. He has authored several research publications in international journals and conferences proceedings, and holds 2 US patents.  He is a Senior Member of IEEE and served in various capacities within IEEE, currently as Secretary at IEEE Region-10 ( Asia-Pacific).

Designing for User Experience : An Overview